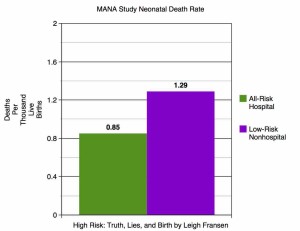 Cheney et al: In 2014, Cheney et al published “Outcomes of Care for 16,924 Planned Home Births in the United States: The Midwives Alliance of North America Statistics Project, 2004-2009” (AKA “the MANA study”) in the Journal of Midwifery and Women’s Health, the official journal of the American College of Nurse-Midwives. A notable strength of this study was that it tracked planned home births regardless of where the women ended up giving birth, information that is impossible to gather from birth certificate data. A substantial majority (at least 13,400 of 16,924) of the home births (birth center births were excluded from the study) were attended by direct-entry midwives; an additional 2613 were attended by CNM midwives (or the similarly-trained, hospital-credentialed Certified Midwives), and the remainder were attended by attendants that do not fit either category, such as students, naturopathic doctors, and chiropractors.

The study revealed that planned home birth results in a low Caesarean rate of 5.3% (compared to the 32.7% nationwide average reported by the CDC in 2013) and a very high breastfeeding initiation rate of over 99% (compared to the overall nationwide rate of 79.2%). Maternal outcomes included one death.

The intrapartum (during-labor) fetal death rate in the MANA study was reported at 1.3 per 1000. It is difficult to find a comparison rate for this number, as the stillbirth statistics in the general population include babies who are not yet full-term as well as full-term babies who die before the onset of labor. Of course, we still have the Janssen study from Canada, which provided us with a comparison rate of .35 per thousand perinatal (during-labor plus neonatal) deaths. Using the Janssen study as a standard, we can see that MANA loses over three times as many babies during labor as Canada loses during labor and the neonatal period combined.

The early neonatal death rate (death after birth but before seven days of life) on the other hand is fairly simple to compare with other rates. The MANA neonatal death rate was 1.29 per 1000. I used the WONDER database to again try to ascertain a comparison group. Using the same years as the MANA study, 2004-2009, I included all term hospital births with a known attendant type that died within 27 days. (I had to average two databases in order to encompass those years.) The hospital neonatal death rate for births with those criteria was .85 per thousand. The low-risk MANA home birth neonatal death rate is over 50% higher. This is especially stunning considering the depth and breadth of complicated cases included in the hospital numbers. MANA’s “low-risk” population should be beating the general population hands-down when it comes to newborn survival, if home birth is indeed as safe as hospital birth.

Section V: Descriptive Studies (Part 11)
The Other Side (Part 13)