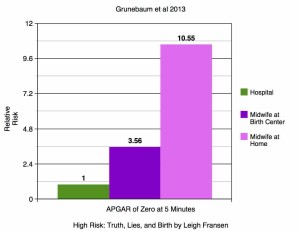 The next step seemed to be to look at what literature MANA had neither generated nor opted to include in their list of “best evidence.” MANA had not provided me with a handy list of opposing information, so I needed to search it out myself.

The first, “Apgar score of 0 at 5 minutes and neonatal seizures or serious neurologic dysfunction in relation to birth setting,” by Grunebaum et al, was the first to examine birth setting by the outcome of a zero Apgar at five minutes. The Apgar score is assigned to every baby at one and five minutes of life, regardless of birthplace, as long as the attendant is trained to assign one. The score is reported on birth certificate data. A “perfect” score of ten indicates a baby that is vigorous, well-oxygenated, and transitioning very well to extrauterine life. A baby with an Apgar score of 0 at five minutes essentially means the baby had no signs of life at that time; a baby with no signs of life at 5 minutes of age may or may not survive, and if they do they will likely suffer from severe brain damage. This study found that babies had 3.56 times the risk of Apgar 0 at 5 minutes when born with midwives at a birth center, and 10.55 times the risk when born with midwives at home. Nonhospital births also carried significantly higher risk of neonatal seizure or serious neurologic dysfunction.

Cheng et al: In the same issue of AJOG, Cheng et al published an analysis of the CDC data that focused on low 5-minute Apgar scores at two thresholds, below four and below seven, as well as neonatal seizure. Cheng found that babies born at home had a nearly two-fold increased chance of a five-minute Apgar below four, and over twice the chance of a five-minute Apgar below seven. Cheng also found that the chance of neonatal seizure was over three times higher in the home birth group. Cheng reported that women who give birth at home are much less likely to experience obstetric interventions such as antibiotic use, induction of labor, and the use of vacuum or forceps-assisted delivery. The paper concluded that planned home births resulted in a trade-off, with fewer obstetric interventions received but a significantly increased chance of neonatal complications.

Rooks: With this literature arising from the obstetric world, the reader may wonder if any midwives had noticed a similar trend. I was able to find one who had: in 2013 a Certified Nurse Midwife in Oregon named Judith Rooks not only identified the trend, but submitted a report to the state legislature detailing her findings. She found that nonhospital births with direct-entry midwives in Oregon carried six to eight times the risk of perinatal death compared to hospital births. She ended her letter to the Oregon legislature in a poignant fashion: “In 2012 six Oregon mothers lost their babies in births attended by DEMs. They may feel guilty about having chosen a home birth with a DEM and are unlikely to lobby their legislators. The more than a thousand women who had good outcomes and are happy are the ones who will call you… Please keep the six women who lost their babies last year in mind as you legislate this year.”