Welcome to Section 2 of a three-part series answering the reader question, “If it was all so bad, why did it take you so long to leave?” This section focuses on my experiences at my school in Miami. To read Section 1, click How I Got In. 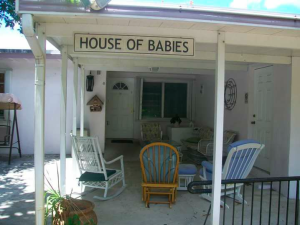 My own water birth at the Miami Maternity Center was everything that I had learned to expect or hope that an out-of-hospital birth should be. I felt autonomous and respected. My 2-year-old was there with me, rubbing my back during contractions until she fell asleep. Nothing was rushed, no one put their hands on me when I didn’t want them to, and I watched my daughter’s birth in a mirror. It was perfect. I imagined that this was how most births at the center probably happened.

Several weeks later I started attending births myself. The first one I attended, we had to use the vacuum. I had no idea that this was dangerous or illegal at the time. I thought it was great that we could help this mom get her baby out without sending her to the hospital, and the mom was totally thrilled. I had coached her through her difficult labor, and she sat in bed holding her baby and thanked me profusely with tears in her eyes. I just knew that we had done a good thing. It all felt right.

The c-section rate in South Florida is very high, so we really felt like we were on a mission to save women from c-sections. At the time, my concept of the “worst thing” that could happen at birth was a c-section. I know this sounds naïve, but I had no real concept that death or injury were possible outcomes, and that c-sections weren’t necessarily ghastly and horrifically painful. If you had asked me at the time if I knew that death was a possible outcome, I probably would have scoffed that such a thing could really happen to a low-risk woman in a developed country where people had good nutrition, and that if it did happen, it was probably “meant to be.”

I found out that the vacuum use was illegal when I was speaking to other student midwives about that first birth. I said, “We had to use the vacuum,” and they quickly shushed me, leaned in, and told me, “We call it ‘the fruit.’” I naively asked why, and they just stared at me. After a few seconds it dawned on me, and I asked, quietly, “Is it illegal?” They gravely nodded.

There are people in this world who would have, at that moment, immediately left the school and filed a report with the health department. I did not do anything like that. Instead, I justified it. There were plenty of ways for me to tell myself that this was ok. We saved the mom from transporting for a c-section, which she would not have wanted. The mom was super happy with her birth and very grateful to us. And to invoke the Golden Rule, I would have wanted someone to do the same for me, had I been in her situation. I figured the law against midwives using vacuums must be unnecessary, a product of a system that didn’t understand how important midwives were and how much good we did for women and babies. The law was wrong, and probably written by clueless doctors, so breaking it was the right thing to do. And all the other students and midwives seemed to agree, because they were all going along with it too.

As I continued attending school, clinic, and births at the center, I slowly became aware of other “favors” that were done for the moms. Like the vacuum, many of the other improper practices that we did seemed at the time like something nice we were doing for the mom. If we fudged something in her chart so she wouldn’t be risked out, it was because we really wanted her to have the birth she wanted so badly. If we “accidentally” had a breech birth at the center, we knew we had definitely saved the mom from a c-section, and she would gush about how grateful she was and how wonderful we were. There was a way to justify everything. And the more I justified, the easier it was to justify. “I did it for that mom, why wouldn’t I do it for this one too?”

When I finally realized that we were hiding the vacuum use from the mother herself as well as her family, I knew that was wrong. But by that time, I had already assisted in many vacuum deliveries at the center. They had all gone well. The moms all seemed very happy. I clung to the idea that “I’d want someone to do this for me to help me avoid a c-section.” And plus, I really wanted to stay in school and graduate.

I was a junior in midwifery school when two students, both seniors and weeks away from graduation, suddenly left the school and filed reports with every state agency they could regarding any and every illegal thing happening at the center. To the students, this was explained away as, “They are just disgruntled students, upset that they had to follow the school rules.” It was a stressful few weeks for the school, but I saw that in the end nothing ever came of any of their reports. The birth center was not shut down; school continued as it always had. I figured that even the state agencies could see that we were doing a pretty good job, and the illegal practices must not be all that big of a deal. Just technicalities.

The head midwife was very careful not to reveal too much too soon. There were some things I did not realize were happening until I was getting very close to graduation. One of the most awful things that happened was when a client I was very close to, who really trusted me, was 41 weeks pregnant. The head midwife said that she was going to insert some evening primrose oil (EPO) to help her cervix ripen, so I got the EPO out of the cabinet. “Oh, I want to give her the larger dose,” she said, and went to get a different bottle of EPO. When I watched her insert the capsules, I saw white powder on the midwife’s fingers. I knew that she had just induced my client, my favorite client, with a drug called Cytotec, without her knowledge or permission. I knew this was dangerous and illegal. I felt a giant lump in my throat and a stinging sensation in my eyes and nose. My heart beat faster inside a suddenly heavy-feeling chest. I had to go outside and breathe.

At that point, I was weeks away from graduation. I had too much on the line. I wanted to get my diploma and get out of there. Three years of hard work and sacrifice for my family were almost over. If I said anything, I’d be kicked out with nothing, just like those other students who tried to blow the whistle. If I said anything, another student midwife would just slide right in to my place, and nothing would ever change. I needed to graduate, and then I could leave and never look back and never ever practice like this ever again.

3 thoughts on “Why I Stayed”